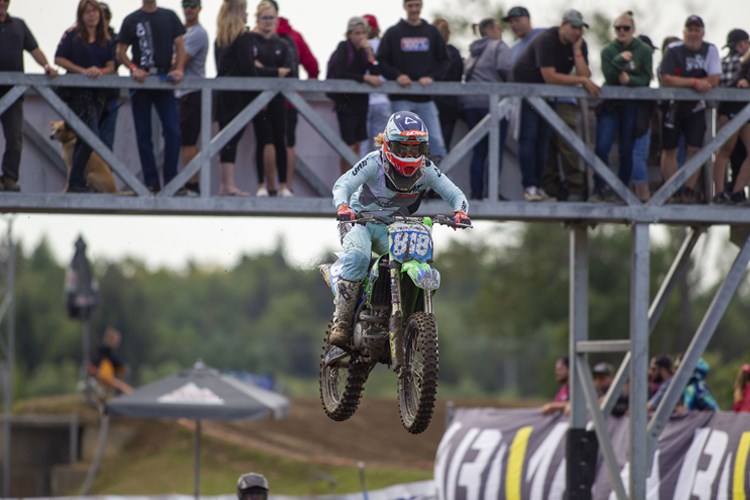 Cindy Trudel is one of the best-known names in Canadian motocross. With 6 championships under her belt, an unusual path to success, and a prolific career, she set important milestones as a female racer and is considered a pioneer in women's off-road racing.

For International Women's Day, we had a chat with Cindy about her success and achievements.

You openly discuss about how you got into motocross competition later in life compared to other riders. What flicked that switch for you and made you want to dive in?

In fact, I started later in life, at 25, an age at which most people stop racing. My brother, who’s 7 years older than me, competed in endurocross and motocross for a long time and I used to love watching him ride. But back in 2004, there were very few women competing. That’s really when women’s presence in the sport started to soar. That’s when I bought my first bike and was persuaded to enter an endurocross race, just to try, just for fun.

I was ill-prepared and didn’t know what to expect, but considering I had never competed before, I managed to finish 4th. I was so close to the podium so I told myself I’d give it another shot, however, this time, with more preparation. Noticing that I was getting interesting results despite my lack of experience, I just kept going and never stopped. I raced in endurocross for 4 years and transferred to motocross after my first pregnancy in 2009.

What made you fall in love with competition so fast?

That’s a good question and it’s hard to put into words. I’d say it’s the constant desire to strive; no time to think about the aches and pains, you push your limits and have to do your best.

Once the race is over, the feeling you get from having given your all, and the pride or even disappointment you get from it make you excited about the next race all the while analyzing where you can improve. The adrenaline you feel on the starting gride is unparalleled. The level of focus you achieve during a race is impressive; you’re forced to understand what living in the present means.

I love the ambience and the effervescence in the pits on competition days. The majority of girls and women get along and we have fun together. I had the privilege of forming bonds with amazing people everywhere in Canada in the United States.

You were very successful early in your career. What do you think helped you climb up the ranks so quickly?

People have helped me realise my full potential in this sport that rapidly became a passion. Michel Falardeau of Moto Falardeau in Mont-Laurier, QC, helped me understand that I’d progress fastest and be most successful on a KX125. I also had the privilege of meeting a former racer through a friend, who became my coach, my mechanic, and a close friend of ours.

Claude Morand is the main architect of my success. I spent countless hours with him practicing on the track and learning the ropes. He also taught me how to work on my bikes and how to find the right settings based on the track and weather conditions.

There’s no magic spell to be successful. It really is a combination of regular training, physical preparation, a good, well set-up bike, being surrounded with the right people, and, to top it off: you need passion, determination, and tenacity.

What was the biggest learning curve facing a younger yet more experienced roster of competitors?

The learning curve was relatively quick in the beginning because I had good foundations and I put all the necessary efforts to succeed. When I competed in endurocross, there was only one women’s category. We were over 40 girls of all ages on the starting grid.

Once I started in motocross, all the girls were younger than me and most of them had started riding at a very young age. They had the time to be involved and to be 100-percent dedicated to the sport. They trained south in the winter and received help and support from their parents.

As a mom, time management was the most obvious challenge as well as, inevitably, the lack of training and the impact of an injury on my work and responsibilities.

Luckily, my passion and determination have been stronger than anything. Ultimately, the most important is the feeling of fulfillment and the ability to have fun.

What has been your proudest achievement?

There are several specific moments I’m proud of, some small, some grand. Of course, my 6 provincial championships in endurocross and motocross, including one against men competitors, are part of my biggest achievements. But I’m also proud of having raced all over the country, of my third place at the Olympic Stadium, of being the first woman to finish on the podium against the men at the Walton Transcan or of being the first female rider to receive equal sponsorship to male riders thanks to Canadian Kawasaki’s trust and vision.

What I’m most proud of, however, is to have persisted despite my age, to remain competitive at a national level, and to be able to positively influence young girls and women, and show them that it can be done.

You’re a proud mom of two and received the nickname « mom racer ». What are the best and the most challenging aspects of combining both roles?

That’s the nickname my friends gave me when I became mom to 2 kids. Let’s say that when they were younger, dad was pushing the stroller on the sidelines and my kids would fall asleep during my races to the sound of the engines.

Now that they’re older and more independent, it makes things easier on dad and my daughter is even the one who accompanies me on the starting grid and gives me little pep talks to motivate me. I like to think that I’m instilling them good values such as determination and courage, the understanding that they must work hard to reach their goals.

It's always fun to go camping with my husband and them for the races. We have great trips and discover new places together. Obviously, my challenge is to get everything ready between work, adult responsibilities, and training sessions to be ready to race.

I don’t have only myself to think of and my husband is the only one who can help me with this preparation. I often show up late on the competition sites, out of breath and tired, but that’s part of my reality and wouldn’t change it anything.

Now, my kids and I ride together (no, dad doesn’t ride) and we have fun, without the pressure. Only pure happiness onboard our Kawasaki bikes.

What values have you learned on the dirt track that apply to life outside of competition?

What I like of this sport is that once you’re on the track, you can only count on yourself. You have to learn to be focused and to live in the present. I learned to believe in myself, push my limits, and to get up and dust myself off after a fall or an injury.

The strength to face difficult track or weather conditions and to push yourself harder to face some obstacle such as daunting jumps. The discipline to get ready, to go to bed earlier instead of going, to train, and to maintain a good physical shape.

Though you face your competitors on the track, it’s important to treat them with respect. That’s why, despite the risks, I want my kids to have their bikes and learn these values and learn these responsibilities because you can get injured or injure someone else.

What advice do you have for riders who are considering motocross or are taking their first steps in the sport?

To surround themselves with people who know the sport and to not listen to what everyone has to say. To accept the fact that they must climb the ladder step by step to avoid injuries and that they won’t get in shape from riding; they have to get in shape TO RIDE. Contrary to popular belief, it’s a physically demanding sport and the rider must control the bike, not the other way around.

Start small; beginners shouldn’t get their start on powerful bikes like a KX450. To go fast and jump far, they need the right technique, not a big engine.
Don’t neglect the importance of lessons. Many athletes and riders offer private or group lessons. Several sites including X-town, Motocross Deschambault or MX Tring-Jonction also offer that service. There’s a lot to learn to ride a bike safely and efficiently. You’ll save time, have fun, and avoid injuries caused by recklessness, lack of control or lack of experience.

What’s next for you now that you have retired? Do you want to remain involved in motocross?

I prefer to call it semi-retired. Motocross is in my head and my heart, and I need to remain involved with competition. I’m forced to admit that at my age, though I can still perform, it takes me longer to recover and it’s become very tiring to keep up and maintain this level of fitness for an entire championship season. That’s why I’ll enter a few races here and there without overloading my schedule.

I love sharing my knowledge, helping others learn the ropes, and sharing the fun of riding while also being safe. I plan on riding my beloved KX250s as long as possible, to keep riding with my kids, maybe even until I’m a granny to go riding with my grandkids.

Opens in a new Window.